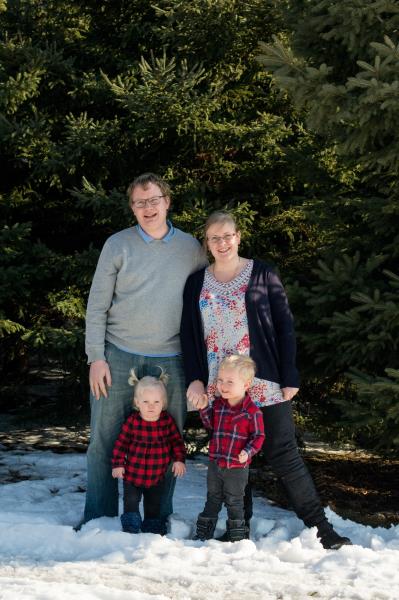 Hello! My name is Ruurd Offringa and I’m married to a wonderful woman named Tara. We have been blessed with two children, Daniel (2) and Anna (1) and are looking forward to receiving another child from the Lord’s hands in September.

The four short years of our marriage have been a whirlwind of changes. We married in November 2016, making wedding plans and immigration plans at the same time. In August 2017 I left behind my enjoyable job as a teacher, and we said goodbye to Australia and said hello to Canada. Shortly after seminary life began, our family started to grow. Daniel was born in May (a bit earlier than expected), followed by Anna 15 months later. At the same time I was spoiled to be a full-time student again, leaving the teaching to others.

I was born in the Netherlands and moved to Canada when I was four. I grew up on dairy farms in Manitoba, with a brief stint back in the Netherlands. It was during these years in Manitoba when I first felt the desire to go into the ministry. When I was 17 my family moved to New Zealand where I did a business degree, not really believing that God could indeed be calling me to the ministry. During this time I also became a NZ citizen. We then moved to Australia, where I taught part-time at John Calvin Christian College for about ten years. As I still felt the desire to study for the ministry I also started studying the languages at this time. It was in Australia that I met my wife Tara. Tara grew up in Australia and enjoys being a mom, cooking, and crocheting. Daniel is our oldest, a quieter boy who loves books and playing with shovels outside. Anna is our lively, outgoing girl who loves being around people.

Although we are enjoying our time in Hamilton, we are also looking forward to what God has in store for us in the years to come. I have asked to be examined by classis in June to become eligible for call.  Beyond that, the future is unknown. We do not even know which country we’ll be living in next year, yet we know that wherever the Lord leads us we will be joyfully serving him. Soli Deo Gloria.